Performance artists with a guerrilla streak, these combinations of performer and costume designer aren’t some unknown subculture: Cosplayers are pop culture icons in the flesh!

What is Cosplay these days then? Is it competitive? Is it a hobby or a passion?

We reached out to our favorite Diablo 2 Cosplay artists and asked them!

Fast Facts: Works as a Level Designer for Ubisoft Sofia

Tips for New Cosplayers: “To do their research about cheap solutions and to keep in mind that the Second hand shops are their first friend for patterns and materials.”

Which three things would you take if your house were burning down?

“My cat. Honestly, everything else is replaceable. “

One thing she can’t live without: Bulgarian yogurt

Kiselo mlyako cannot be produced anywhere else in the world except Bulgaria, because it’s uniqueness lies in the peculiarities in the climate of the region and the very specific way in which it is prepared – using a combination of the two strains: Lactobacillus Bulgaricus and Streptococcus Thermophilus. This is the main reason why I cannot imagine to live outside the country for a long period of time.

aka Amanda and Rory Webb

Cosplayers with 6 years of Convention Experience

My tip for cosplay newbies is to use the resources that are available! YouTube has been especially helpful. I pretty much taught myself how to sew by watching various tutorials there, and Rory was the same with foam armor crafting. Practice makes perfect. So keep going and don’t be afraid to start!

One material thing she can’t live without: Her Kindle.

“I think I can’t live without my Kindle, I guess? I love to read, and there’s tons of eBooks I can get free from my library!”

Legend of Zelda Breath of the Wild! This game is just gorgeous to watch. Rory and the two older kids play it, and I just watch, but I have fun helping out with the puzzles. Mario Odyssey and Dragon Quest Builders are also frequently played on our Switch lately.

Cosplayers with 11 years of combined experience

Tips for New Cosplayers: “Not (to be) afraid to experiment and not afraid to start. Everything will work out. You need only a little practice and a lot of time.”

Which three things would you take if your house were burning down?

One material thing they can’t live without:

What made you start Cosplaying?

“Desire to do something with own hands [sic]” the “armor, weapon from favorite games”.

Competitively what separates the amateur from professional cosplay is split into 4 categories: accuracy or resemblance to the characters, overall craftsmanship of the cosplay costumes being judged, overall presentation, and audience impact.

As a cosplayer decides on projects, it’s normal to choose one close to your heart. Hanna and Enishi are no different: “She was my very first character. As a child I started playing Sorceress many years ago [sic]. I have good memories with her,” Hanna told us. Enishi also found himself in the “same situation” when choosing the Necromancer, “…I love his design”.

Enishi and Hanna continue to play D2, “We both played a lot Diablo 2 in [sic] childhood…we sometimes return to the game. Most often we play for [sic] these characters.” Desislava’s love for Diablo 2 as well, “I played (D2) when I was a little one… I played the Necromancer.” To this, she added, “Fun fact, I am a lot into LARP and my character is also a necromancer.”

Speaking of another Necromancer and Sorceress’ cosplayers, what about Rory and Amanda?

Ok, so Rory and I have been playing Diablo 2 since it came out! So what is that? Like 20 years? Haha, I don’t even know! We haven’t played super recently, but it’s by far one of our favorite games. Our kids haven’t played it… yet!! They really enjoy WoW…it’s only a matter of time.

“Yet” being the operative word. This is great news overall for the community, fresh blood in the fight against the three Prime Evils is always welcome!

aka The ABC’s of Cosplay: Fabric, papier-mâché, and PVC

The process of Cosplay starts as an idea, then there’s effort. A lot of it. Making something real and tangible, off a design you’d only imagined takes effort in boatloads. “We made the costumes!” Amanda Webb happily said, which is fairly common for most cosplayers.

Projects can have deadlines though, and always could use extra hands: “The costume was done in a very, very short time… to finish the costume on time some friends of mine helped me,” Desislava stated.

Cosplaying, from imagined costume to walking around the convention takes a little more than just typing and clicking a few times on Amazon: The materials used are normally the most interesting part, because they’re normally common items. Amanda told us:

Rory did all of his necromancer armor out of those foam yoga mats, and I made the sorceress armor from thinner foam. I sewed most of the clothing parts, or modified them from existing pieces of clothing. Rory crafted the weapons using yoga matt foam as well. Oh, and the sorceress crown was made from Worbla.

Yep, that’s not misspelled or made up, Microsoft and dear readers. So what is Worbla? A quick google search reveals it’s the super-secret thermoplastic Cosplay fabric that is the answer to every Cosplayer’s crafting needs. Google also revealed this while also producing exactly 1 billion “How to” videos on how to mold it after heating it!

Hanna used some for her costume as well, “Fabric, eva-foam, thermoplastic” and even “a [sic] LED for the sphere in the staff”. But don’t think thermoplastic will be the only unusual ingredient to a costume; Enishi used real handmade CHAINMAIL! “…chainmail is real and takes a lot of time making”. Authenticity and skill usually are paired together with time. Because that time invested combined with clever craftwork have extraordinary results.

Our best D2 cosplayers only have one thing in common about their costumes: They’re spectacular! So here’s our Top 3 favorite Diablo 2 cosplay costumes to this date: 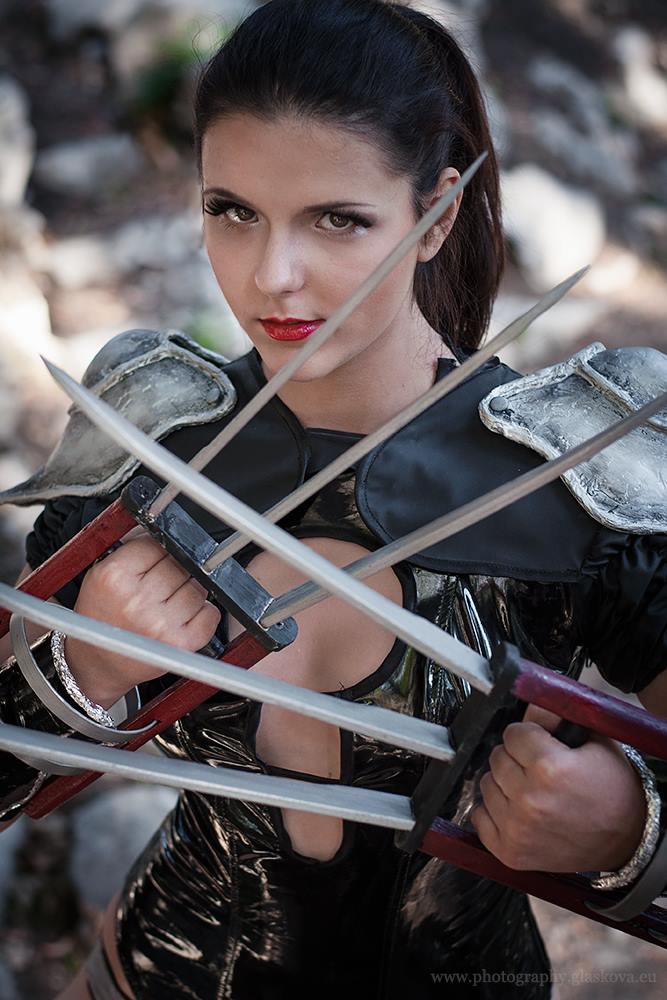 THE WEBBS GOT THEIR SERVER DIFFICULTY UP TO 5 WITH THESE PARTY SIZES!

Classically important for any stage, these categories separate someone in costume from Cosplay. Like ancient Rome, the crowds cheering can affect the outcome.  Judges can’t deny stage presence, and having a good time helps!

Most Cosplayers pick characters that they have a special affinity towards. Simply put, this is where the cosplayer’s homework and love for the character normally shines. Whether choosing your character or having it chosen for you, the audience can always tell if you’re having fun or if it’s forced.

Desislava’s first time cosplaying is a great example of having a great time: “This is a funny story. Friends of mine invited me in [sic] their cosplay group, but they didn’t tell me from which anime or game we are [sic] cosplaying and which character they have [sic] picked for me. They said they will [sic] let me know only if I agree (d). And I did…”

Ready for the big reveal, Desislava learned her new group was doing a Pokémon parody!

Depending on the convention, stage time for groups can vary: “…we performed on the stage of Aniventure 2010. It was 20mins long and the scenario, stage props, and so on were made by us. It was pure fun!”

Sounding less like a long improvisation scene and more like an improvisational micro play, Desislava’s group definitely had to connect with the audience to keep their attention for 20 minutes. But how was the Cosplay received? Was it a smash hit? Or a lame Psyduck?

Later on her group took the stage again, this time for the judges to give them the ‘Best of Show’ award.

But like any artist, the greats are known for their dedication to the craft. Practice makes perfect. The prizes and awards are well deserved but don’t explain the artist. Cosplay’s depth and definition is in all the work the judges and audience don’t see.

Finding time is difficult, especially fitting the crafting Cosplay requires into a busy schedule, “I wake up around 7 am, go to the gym, (at) around 10 AM I am in the office.” Desislava stays until her work is done. Is it off home to do it again? No, “…Right now half of the week I go to the university after work to study Graphic design…” Desislava’s discipline and determination seem to be a common trait in Cosplayers. Enishi and Hanna spend their days honing their craft, “cosplay and craft. I craft for us or for my customers every day… And games.” They both add!

Maybe it’s not about keeping a tight schedule.

Maybe it’s in the dedication and practice, to finish and then start all over again.

Like any craft, that’s Cosplay: The definition is inside the going back to the drawing boards and planning for what’s in store for the next one.

Desislava has “…an eye on the Demon Hunter from Diablo III”, while Hanna and Enishi are doing another “…few photo-shoots for these costumes”.

Our #1 Cosplayer Family, the Webbs, let us know the whole plan:

Our next family project is for Halloween; we are all going as Teen Titans Go characters since it’s our kids’ favorite show. And for next year (‘s convention), our tentative plan is to go as characters from the Netflix Castlevania animation! I’m also slowly working on a dream cosplay, a gender bend version of the Prince from Prince of Persia (the 2008 PS3 game).

“I welcome everybody to Aniventure Comic Con in Bulgaria. Guests of the event like Kamui Cosplay and Mellus cosplay confirmed that this is one of the better or even the best cosplay event they have ever experienced.”

“Maybe Blizzcon for all Blizzard fans…We are going to Blizzcon this year.”

No more will the term ‘Cosplay’ be commonly confused for the tired residents of an old west town or civil war re-enactment soldiers. NAY! They’ll part seas of convention-goers, from your local area to BlizzCon:

Everyone needs a picture with his/her favorite character come to life!

Any plans for another Diablo 2 Cosplay or Cosplay in the future?

Yeah, you, reading this, do you have any plans for Cosplay in the future?

Let us know in the comments below!