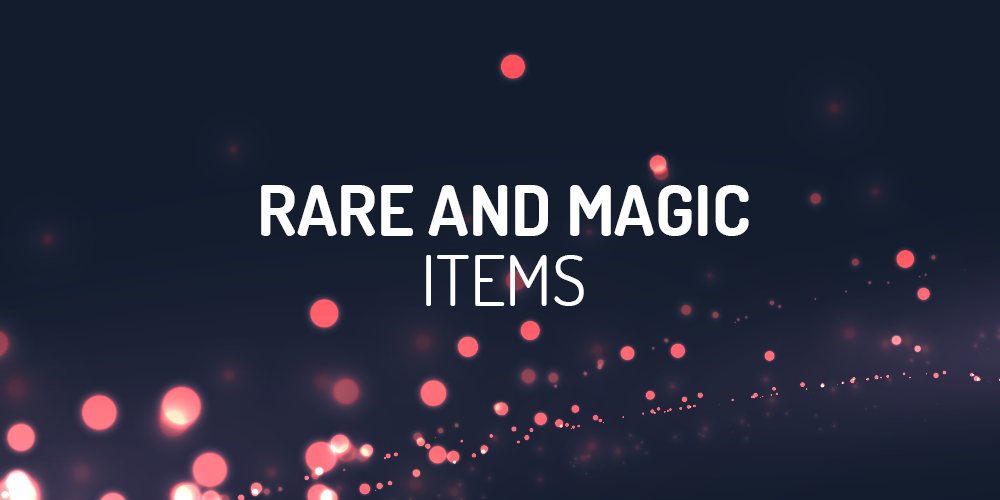 Although they are much less common, Rare Items are more powerful than the standard Magic items. A Rare item appears under a yellow title when highlighted.

Actually, Rare Items are just Magic Items with more than one Magical Suffix/Prefix and with a special name.

However, the names of Rare Items are not related to their stats and they don’t help to describe what stats may appear on a Rare Item. Their names are randomly generated, but some of them don’t include a Prefix/Suffix name.

In addition, Rare Items can have 2 to 6 magical attributes known as Magic Suffixes or Magic Prefixes.

Rare Items are pretty unique because they can offer 2 to 6 random magical attributes from a random range and their names are also random. Although it’s not impossible to find two Rare items with the exact same stats, probably they will have a different name. Therefore, it can’t be listed a complete board of Rare Items.

Finally, only one Suffix or Prefix can appear per group. For example, if the Prefix Wyrm (+41-60 Mana) appears, Dragon’s (+31-40 Mana) will not appear because it belongs to the same Prefix group (+Mana).

Regarding the attributes Levels while gambling, the Rare Items follow the same rule of -3 to +6 Level from your character’s level.

After Hell’s forces corrupted the land of mortals, blacksmiths and mages created many magical items in order to keep humans safe from harm. They enchanted items like weapons, jewelry, and armor with arcane energies to assist the heroes who battled versus the evil beings. You will encounter these kind of items during your travels and you can recognize them by their name that appears in blue letters.

A Magic Item has a Magic Suffix or Magic Prefix, or both. However, a Magic item can never have two Suffixes or two Prefixes. More specifically, the chances are:

The difference of Magic Items is that Suffixes and the Prefixes are random, and their effects are random within a range as well. It’s possible though to find two identical Magic Items.

Wands, Circlets, Orbs, and Staves have a special magic ability or Magic Level. It allows you to obtain higher level magical Suffixes and Prefixes on items from gambling (Circlets only) and Monster Drops. This bonus only applies to the bonuses that appear on the items themselves.

Note that this will not help generate better Magic Suffixes and Prefixes on other items when you have them equipped. Thus, when you get a Circlet through Gambling or a Monster drop, the Magic Level will improve the chances that a better Magic Suffix or Prefix will appear on it.

When considering which Magic Prefixes and Suffixes you can get by gambling, the level of the Magical Prefix or Suffix is checked regarding the randomly chosen value in the range of -3 to +6 levels of your character’s level. For instance, a Magic item with a Suffix level of 90 could be available at Level 84 Character.